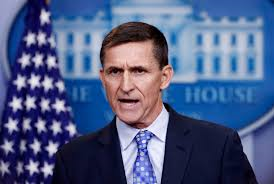 Lawyers for Michael Flynn notified the president's legal team in recent days that they could no longer discuss the investigation by special prosecutor Robert Mueller, the Times reported, citing four people involved in the case.

The development indicates that Flynn is cooperating with prosecutors or is negotiating such a deal, the report said.

"That agreement has been terminated," the Times' sources said.

He was forced to resign three weeks later over his Russia contacts.