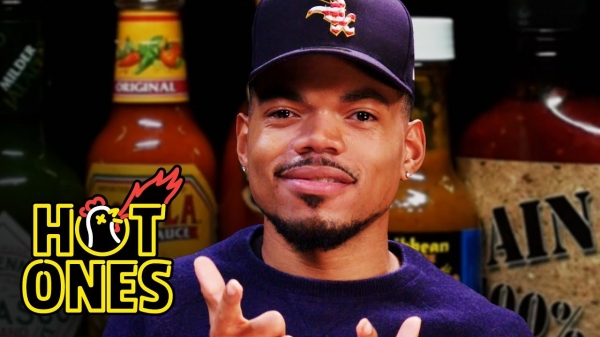 The three-time Grammy award winner, Chance the Rapper, was the latest celebrity to take on the dreaded Hot Ones Challenge. The Chicago native went head-to-head against 10 chicken wings with a range of hot sauces from 1,800 to 2,000,000+ Scoville units. The host, Sean Evans, went on to interview Chance on topics about how Chicago venues letting him perform helped progress his career, Kanye’s Sunday Service performances being impactful, and Chance the Snapper.

He came onto the hit popular web series to promote his debut studio album The Big Day, reality music competition Rhythm and Flow, and his upcoming tour starting Jan.15 in San Diego. He Chance has been very busy and looking to get that quality promotion for everything that he is involved in.

The rapper confessed later on in the interview that unlike most people who have been on the show, who he said were all former athletes at some point in their life, he doesn’t have that same drive to finish the challenge. He didn’t care if he finished it or not. It was pretty disappointing to see that he didn’t have any sense of determination to finish the challenge, which would be an impressive feat that takes a lot of mental strength. Granted he did push himself to try to complete it by taking a small bite, but in the end, he landed on the Hall of Shame, which is a hall of all the quitters. From DJ Khaled to Mike Epps, Chance just couldn’t handle the heat.

What did you think of his performance? Let me know.